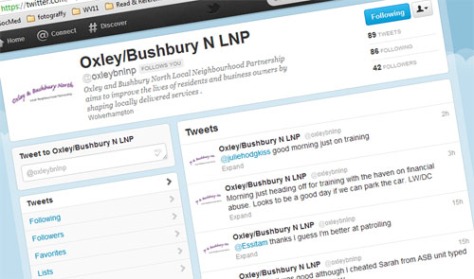 I said in my last post how James and I started live tweeting from our local PACT meetings and how that has developed in our area.

Last night another LNP area picked up the idea and started tweeting from their PACT meetings, Oxley and Bushbury North LNP neighbourhood wardens had recently recieved training from me as part of my day job with Podnosh and I’d used the WV11 live tweets as an example of how they could use twitter in their area – so they did!

What was great for me as I was watching the #OXPACT tag was not only the thought that I had taught them how to do that – giving them an introduction to the skills they would use to communicate in this way BUT also how well they were immediately received, with local councillors picking up the updates and spreading them to their networks too.

I think it would be fair to say James and I was were treated with caution and a little suspicion when we first started live tweeting from our meetings – not everyone, partners and community alike, could immediately see the value in what we were doing but we stuck by it. We knew it was being well received online and now people are not in the slightest bit phased when we turn up phones and laptops in hand – and ask questions or give feedback to the panel from people who aren’t even in the room.

I like to think that our persistence, and insistence  in the value of this type of communication has in some way paved the way for the LNP wardens from other areas of Wolverhampton to dip their toe in the water and try this out for themselves!

For months now WV11 has been live tweeting from both PACT meetings that take place in our area – sometimes it’s James, sometimes it’s me behind the keyboard but whoever it is, its always been very well received from our followers locally and further afield.

These live tweets led onto other things like the PACT Live online event we ran last October (another one is in the works and is happening soon) and last night with the support of Neighbourhood Safety Coordinator Mac Jarvis we took it another step further mixing the online activity with the conversation in the room.

With a projector, a laptop and visibletweets.com we had a display of the online conversation has it happened.

It was well received and after a brief conversation with Mac it became clear he’s looking at ways to get more people involved – to have tweeting live from all the meetings in the North East sector!

This is brilliant news for community engagement and I’m a more than a little pleased that it was James and I with WV11 that did it first!!

Tonight @WV11 took #WSPACT live tweeting to the next level. Tweets on screen in the meeting! Live feedback!

Talking about social media and doing things in the community