On my way to work this morning I took an photo of an application posted the shutters of a shop that has stood empty for over 12 months for a license to sell alcohol. I emailed it to James who duly posted it to our facebook page: 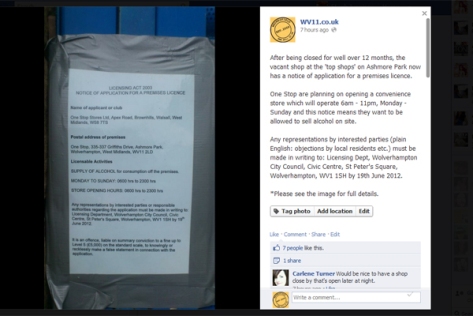 A few hours later a comment appeared from one of our local councillors “Just a note to say that I have an expanded article on this on www.philbateman.com– would be pleased to receive constituents views. Also still keen to meet with WV11?” 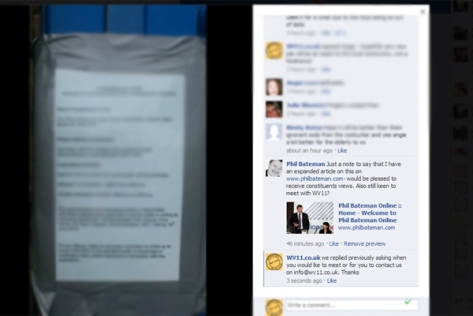 To which we duly responded and then followed the link to his site to find the story.

Once there I was a little dismayed to see no credit whatsoever to WV11 as the source of the information. In the 3 years we have been running our site we have come to expect this from the Express and Star, but from a local councillor not so much so, especially as we have credited him with stories in the past, let him post links to his website from our facebook page* and gave him and all the other candidates coverage in the local elections.

I took to twitter (as I often do) to vent my frustration about this – the following conversation took place – the first tweet it missing from the screen grab but it read:

Love it when local councillors take stories from your hyperlocal website without giving credit…. 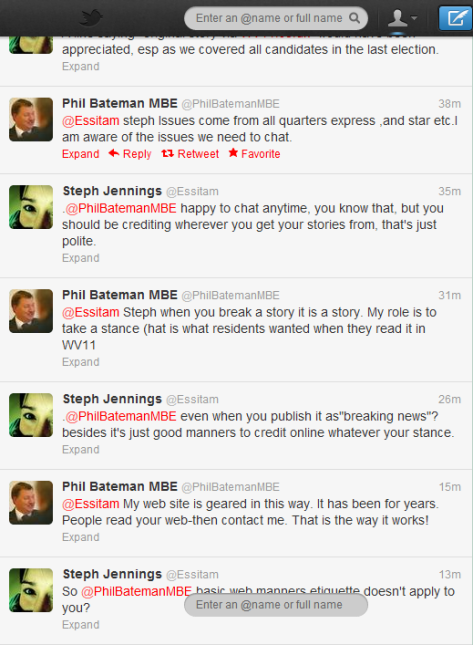 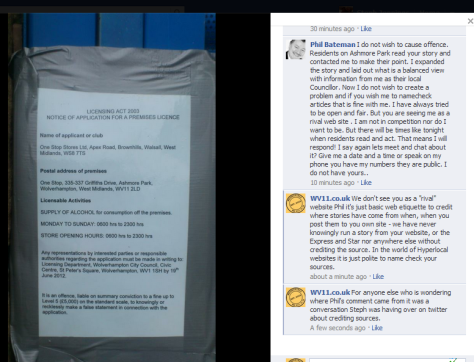 Now as I said in my reply to Phil on Facebook and will happily reiterate here – I don’t see Phil Bateman as a “rival” website – our roles are very different. What had irked me was the lack of basic web etiquette and what has annoyed me more was his response to it.

I took to twitter to vent – without calling him out by mentioning him, as while annoying all in all it’s not the end of the world.

When using other people content verbatim (ahem Express and Star) or using their content as a basis for your own content it is basic manners to cite your source or link back to the original article  – this is true of blogs, news sites, photo sharing sites – heck anywhere online- there are whole articles on it,  including this one on the web for Dummies  BUT  now it’s his responses both directly  to me on twitter and publicly to our community on facebook has really rubbed me up the wrong way.

Firstly his twitter response – why do the rules of the internet etiquette not apply to him?  He may not be a “news” site – but then I could argue neither are we conventionally  – We are a community website. Secondly why then take the conversation to our facebook page? – he was talking to me as an individual on Twitter who was annoyed, NOT as WV11 in front of the community?

I vented on twitter without mentioning him as I was frustrated, I am calling him out on here as I’m quite annoyed.

Basic manners apply to all on-line and offline. Mr Bateman is not the first to fall foul of this and I’m sure he wont be the last but web etiquette costs nothing and my advise to all  is if you are engaging with someone on a platform stick to that platform and if you use someone’s content link often and link generously!

The stupid thing is if you link to a more sites – particularly popular ones and they link back (which we do) you even help your own (excuse the swear word) SEO!

As I do more and more stuff in my community I wanted a place I could dump my thoughts and observations about things there that is separate to my blog where I dump random photos and thoughts about parenting and life and this is it.

I hope to write about both real world and digital activities, we’ll see how long it lasts.

I live in Wednesfield, Wolverhampton and things I’m currently involved with are:

Board member for the Wednesfield and Fallings Park Local Neighbourhood Partnership (LNP) where at this moment in time I  also sit on a community arts panel to look a project for near Bentley Bridge and the “events” committe – to help organise things like the Christmas lights switch on events (which I usually miss because I’m working – sods law!)

Regularly attend both the Wednesfield North and Wednesfield South PACT meetings where I live tweet for WV11.co.uk and input as a resident

Member of the parents panel for my son’s school – although I’ve been a bit lax recently as I’ve been busy with work during the last 2 meetings – oops – but sometimes something just has to give!

Set up the first and continue to be involved with the Wolverhampton Social Media Surgery.

And finally this year I am committee member (and secretary/note taker) for the Ashmore Park Community Together group – we are a group of community member who have come together to organise a fun day to celebrate the Queens Diamond Jubilee.

I think that’s it – unless you add in teaching my crazy but lovely neighbours how to use their computers and helping the Wednesfield South TRA understand their website, Phew – it seems I’m quite a busy girl when you add in working full time, my family and social life – but I’m not complaining – It’s my choice entirely and I love it.

Talking about social media and doing things in the community